Home > News > 2021 > The new version of the Saphyr optical map production system from Bionano Genomics is now in operation at the CNRGV. 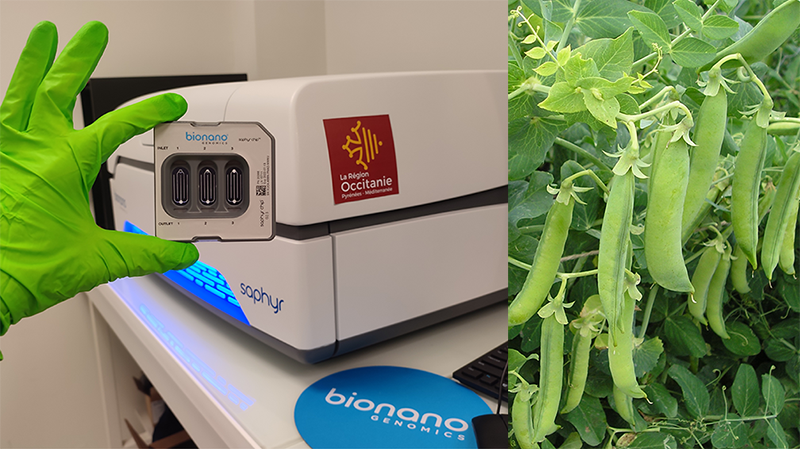 The new version of the Saphyr optical map production system from Bionano Genomics is now in operation at the CNRGV.

Benefiting from funding from the  Occitanie region, the CNRGV has the new version of the Saphyr system from Bionano Genomics.


This evolution of the Saphyr system allows to produce :

- simultaneously 3 optical genome maps instead of 2.
- more than 5000 Gbp per genome instead of 1300 Gbp, a gain of 280% and the promise of obtaining unique contigs at the scale of a chromosome, for example.

In the framework of the PPR Specifics project in collaboration with Marie-Laure Pilet-nayel of the UMR IGEPP (Rennes), a first optical map of Pea, Pisum sativum (4.3Gb), has been produced using this new system.

This map presents record metrics with an N50 of 63Mb and a maximum map size of 236 Mb. Several chromosome arms are fully assembled, highlighting the efficiency of this technology for plant genomics.

Concerning the technology used, it remains the same. It is a very high resolution scanner that allows the visualization of DNA molecules marked at specific sites by a fluorophore. Within a chip, the DNA molecules will be stretched, individualized by electrophoresis, through nano-channels. During each electrophoresis cycle, the image of 120 000 nanochannels will be captured.

We thank INRAE and the Occitanie region, for having contributed to the acquisition of this relevant tool, for the improvement of the knowledge in plant genomics.