Construction of a BAC library of the tetraploid species T. dicoccoides

Triticum dicoccoides (genome BBAA), the wild progenitor of most cultivated wheats, was first allopolyploid wheat which presumably formed a few hundred thousand years ago (Levy and Feldman, 2002). This tetraploid species originated via hybridization of diploid wild einkorn wheat, T. urartu (genomes AA), with a species closely related to the extant Aegilops speltoides (genomes SS), which contributed the wheat B genome. In addition to its phylogenetic importance, T. dicoccoides as the other wild relatives of crop plants may serve as a promising source for screening for new disease resistance genes that can be utilized in breeding programs (Cheng et al., 2010). It is estimated that the genome size of tetraploid wheat  T. dicoccoides are ∼1.2 × 1010 bp (Bennett et al. 1998).
Bacterial artificial chromosomes (BACs) are valuable tools that allow the cloning of large fragments of DNA and are used for gene positional cloning strategies, for genome structure analysis, for genome organization comparisons between related species and for map saturation with molecular markers and microsatellite discovery in targeted regions. Specific of the T. dicoccoides is a combined resistance to many plant diseases; that is the reason for involving this wheat as an initial material in breeding. Additionally to applied genetics the comparison of gene regions of homoeologous chromosome of T. dicoccoides and T. aestivum allows to shed the light on the organization and evolution of gene regions from the first allopolyploid up to present hexaploid forms. Despite this, the works directed to construction and analysis BAC clones of wild emmer wheat are absent.

The aims of this project are:

1.  The construction of a BAC library of the tetraploid species T. dicoccoides .
Accession G-6 of  T. dicoccoides collected on Mount Hermon (Israel) has been selected for the construction of the library. The area of accession G-6 is a possible site of  T. dicoccoides origin.
BAC library construction will be performed as described previously (Chalhoub et al., 2004). The main difference from the previous protocol will be that we will use a non-gridded BAC library. Actually, in order to avoid problem related to the storage of the BAC clones, screening will be made directly on the pools of clones of transformants. Positive pools we be plated to identify positive clones through hybridization screening. The strategy is faster and will facilitate direct targeting of the BAC clones carrying the genes.

2. The screening of the BAC library with the markers specific to several genes or gene regions located on 5B chromosome .
The group of E. Salina (Institute of Cytology and Genetics -IC&G-, Novosibirsk, Russia) has taken the leadership for developing the physical map and sequencing of chromosome 5B. Some genes which located on 5B chromosome are under studying.
VrnB 1 gene (response to vernalization)
The Vrn system is the most important for wheat adaptation to low temperatures. The occurrence of dominant Vrn genes in a genotype determines its spring habit and the rate of generative development and, thereby, its earliness. SSR mapping of VrnB1 gene on 5BL was done by the Russian group previously (Leonova et al., 2003). The different alleles of the VrnB1 are present in Russian wheat variety (unpublished data). The primers to VrnB1 genes developed by Russian group (unpublished data) will be use for screening of  T. dicoccoides BAC. Additionally, the selection of BAC clones with   VrnA1 gene (5AL) will be done ( VrnA1 primers are published - Yan et al., 2004).
The future sequence analysis of chosen BAC clones from T. dicoccoides and comparison with 5BL DNA sequences from T. aestivum will allow to receive new information about the structure–function organization of homoeologous Vrn1 genes and their reorganization during evolution of tetraploid and hexaploid wheats.
Ne1 gene (hybrid necrosis)
Hybrid necrosis, characterized by necrosis of leaf and sheath tissues on hybrid plants, has been frequently observed in F1 hybrids between genotypes of common wheat and between common wheat and tetraploid wheat (Tsunewaki 1992). Hybrid necrosis is usually lethal or semilethal, resulting in gradual death or loss of productivity (Tomar et al., 1991). Therefore, hybrid necrosis is a serious barrier either for combining desirable traits from different genotypes of common wheat or for transferring genes from related species to commercial cultivars (Bizimungu et al. 1998). Two dominant complementary genes  Ne1 and Ne2 are located on chromosome arms 5BL and 2BS, respectively. According to the published data the nearest microsatellite marker Xbarc74 was linked to Ne1 at a genetic distance of 2.0 cM on chromosome arm 5BL (Chu et al., 2006). It will be particularly useful to develop of closely flanking markers for the identification of the hybrid necrosis genes.
Earlier three pair of COS (Conservative Orthologous Set) markers were developed for the region of Ne1  gene by the Russian group (unpublished data). This markers are non-polymorphic that is the reason for developing new markers which will be convenient for mapping and identification of Ne1 gene in tetraploid and hexaploid wheats.

The data that will be obtained in this project will provide new essential resources for further physical mapping, large-scale sequencing, bioinformatics for assembly and annotation, and synteny analysis. Also the obtained results will be essential for development new molecular markers and for isolation of genes of interest both for basic research and applied work in practical breeding. 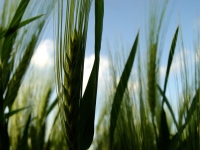 Publications related to the project: