Meiotic recombination is a fundamental process for all sexual eukaryotes; it is required to produce balanced gametes and therefore is essential to the fertility of species. Furthermore, meiotic recombination is also crucial for plant breeding because it allows, through the formation of crossovers (COs), to reshuffle genetic material between individuals and between species. Major international efforts have been made to identify the genes that are involved in meiotic recombination in plants, primarily using diploid Arabidopsis thaliana as model system. Therefore much of this work has disregarded the consequences of polyploidy, one of the key features of crop plant genomes, on meiotic recombination.Essential questions thus remain unsolved: How is meiotic recombination regulated in polyploid (crop) species? Why and how does polyploidy increase the rate of meiotic recombination? How can such improved knowledge on recombination be exploited for crop improvement? This project will address these questions specifically, using two complementary polyploid crop species: oilseed rape (Brassica napus; AACC; 2n=38) and bread wheat (Triticum aestivum; AABBDD; 2n=42).

We will set up a complete set of integrated analyses to explore many inter-related aspects of CO regulation in polyploid crops.

Task 1 aims at characterizing the molecular underpinnings of CO suppression between homeologous chromosomes in wheat and oilseed rape. We will proceed with positional cloning of the PrBn (in oilseed rape) and Ph2 (in wheat) loci. For this latter case, particular emphasis will be placed on evaluating TaMSH7, the most promising candidate for Ph2. CROC will thus advance understanding of the mechanisms that hamper the incorporation of beneficial traits from wild relatives into crop plants by promoting a diploid-like meiosis in allopolyploids; overcoming this specific stumbling block would openthe road to the creation of new crop varieties resistant to diseases and more efficient in nitrogen use (to name only these).

digenomic triploid AAC hybrid and its possible application to wheat. We will determine whether these extra COs i) arise from one or the other CO pathways and ii) can be combined with those resulting from the mutation of an antirecombination meiotic protein. We will unravel the individual and interaction effects of three C chromosomes on the rate and distribution of COs between homologues and test whether wheat pentaploid AABBD hybrids have the same boosting effect on CO frequencies as Brassica AAC triploid hybrids. The expected outcomes will pave the way to broaden the genetic variation that is available to plant breeders.

CROC is a timely project that is shaped to address fundamental questions with practical objectives; it is directly upstream of research on innovative plant breeding technologies contributing to the competitiveness of French/European Agriculture and thus completely relevant to this call. CROC combines a group of researchers with a comprehensive and complementary expertise and set of facilities. Its strong translational emphasis ensures that the results obtained will have general significance that extends beyond oilseed rape and bread wheat. Our work will thus shed new light on the pending cause of CO variation in polyploid plant species, a critical issue for genetics, evolution and plant breeding. 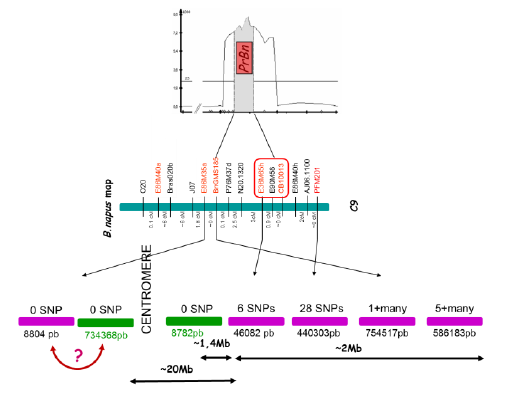 PrBn is the main determinant for CO formation between homeologous chromosomes in B. napus allohaploids; PrBn was first identified by conventional QTL analysis and mapped on chromosome C9, within a less than 10cM interval.

Using markers closely linked to PrBn as BLAST queries against the B. napus pseudomolecules, it was estimated that the entire region surrounding PrBn is ~20 Mb long and that it encompasses the centromere of C9. All but one of the markers most tightly linked to PrBn are located in an interval of ~2-3Mb on one side of the centromere that anchors 5-6 almost contiguous scaffolds. These markers are less than 2 Mb away from a meiotic recombination gene we mapped on C9.

Publication related to the project