Coffea arabica is the first variety of coffee consumed worldwide. Coffee leaf rust (CLR) due to the biotrophic fungus Hemileia vastatrix is one of the most serious diseases in Arabica coffee (Coffea arabica) and causes annual economic damage estimated at more than US$ 1 billion. The SH3 factor involved in resistance to the coffee leaf rust has been genetically mapped by Philippe Lashermes’ group ( Mahe et al., 2008). The SH3 resistance region has been transferred from the resistance variety Coffea liberica into Coffea arabica genetic background.Our goal is to isolate this genomic region carrying the resistance to H. vastatrix fungus, the agent of CLR. .
In the frame of our non-gridded BAC library approach, we aim at characterising this specific resistance region, by establishing BAC contigs and sequencing them. 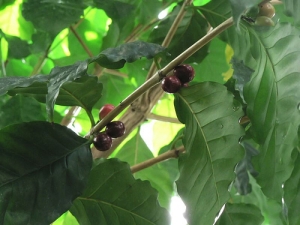