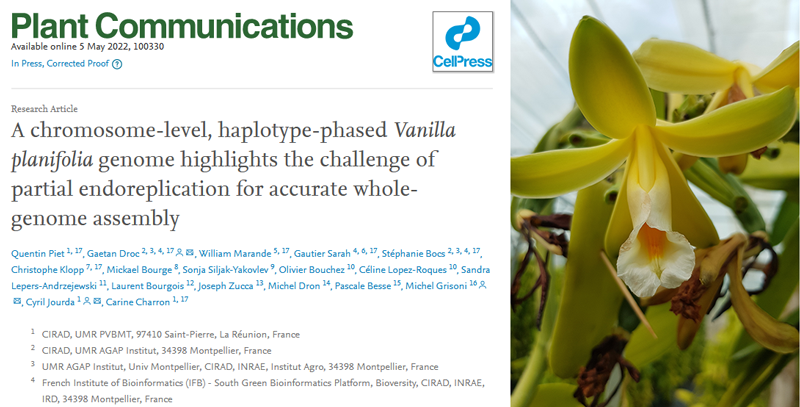 The vanilla genome sequenced by the French consortium VANISEQ

The genome of the vanilla cultivar Vanilla planifolia, the world's major pod-producing species, has just been published.


The assembly represents 83% of this 4 gigabases heterozygous genome, consists of 16 chromosomes and contains 59,000 genes.

This genome will speed up and make more accurate the process of breeding of Vanilla.

Its publication is the result of four years of joint work of a French consortium, coordinated by Cirad in Réunion.

The consortium is composed of two private companies, Eurovanille and V. MANE FILS, and six public research organizations: Cirad, the University of La Réunion, INRAE, CNRS, the University of Paris-Saclay, and the Tahiti Vanilla Establishment.

In this consortium, CNRGV carried out the extractions of high molecular weight DNA for HiFi PacBio sequencing and the production of an optical map.

To overcome the phenomenon of partial endoreplication of the genome, which leads to variations in the DNA content of cells depending on the tissue, we used the nodes of the vanilla to extract the DNA.

Long-reads sequences were produced by the GeT-Plage platform in Toulouse and assembled by the SouthGreen bioinformatics platform in Montpellier.

Finally, we integrated the sequences assembled into contigs and the optical genome map to obtain a high quality continuous final assembly including haplotypes separation.