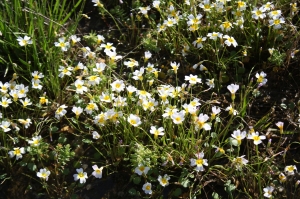 The Leavenworthia self-incompatibility locus (S locus) consists of paralogs (Lal2, SCRL) of the canonical Brassicaceae S locus genes (SRK, SCR), and is situated in a genomic position that differs from the ancestral one in the Brassicaceae. Unexpectedly, in a small number of Leavenworthia alabamica plants examined, sequences closely resembling exon 1 of SRK have been found, but the function of these has remained unclear. BAC cloning and expression analyses were employed to characterize these SRK-like sequences. An SRK-positive Bacterial Artificial Chromosome clone was found to contain complete SRK and SCR sequences located close by one another in the derived genomic position of the Leavenworthia S locus, and in place of the more typical Lal2 and SCRL sequences. These sequences are expressed in stigmas and anthers, respectively, and crossing data show that the SRK/SCR haplotype is functional in self-incompatibility. Population surveys indicate that < 5% of Leavenworthia S loci possess such alleles. An ancestral translocation or recombination event involving SRK/SCR and Lal2/SCRL likely occurred, together with neofunctionalization of Lal2/SCRL, and both haplotype groups now function as Leavenworthia S locus alleles. These findings suggest that S locus alleles can have distinctly different evolutionary origins.