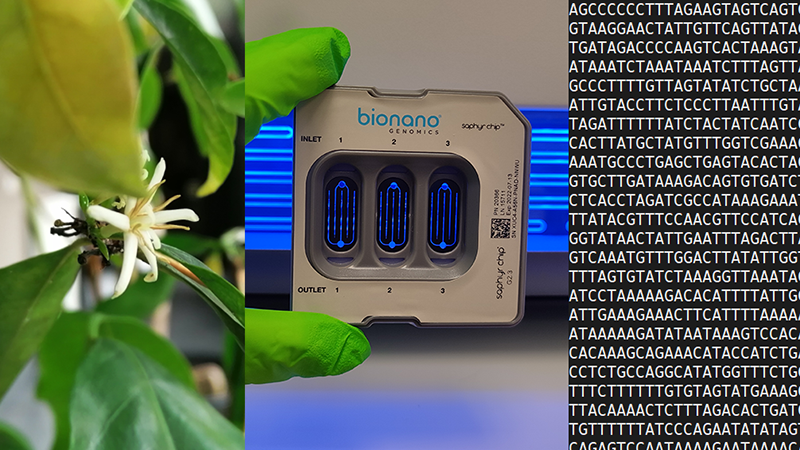 The combination of optical map data, produced from the new version of Saphyr installed at CNRGV in August, with Pacbio Hifi sequencing data, allowed us to quickly obtain an excellent assembly of the Coffea mauritania genome.


Coffea mauritania has a diploid genome of 450Mb with 2n=22 chromosomes and a low heterozygosity rate estimated at 0.6%. From the high molecular weight DNA that we extracted from young fresh leaves we obtained :

By combining the data from these two technologies, we obtained 11 main scaffolds with an N50 of 36Mb which corresponds to 1 scaffold per chromosome. Such a telomere to telomere assembly constitutes an extremely valuable reference to study the evolutionary dynamics of coffee plants and in particular the intra and interspecific structural variations.

These results are the result of the work of Nathalie Rodde for the production of the optical map, Caroline Callot for the production of the Pacbio Hifi libraries, Charlotte Cravero for the assembly of the sequencing data and Stéphane Cauet for the hybrid assembly of the two technologies (CNRGV). This work was carried out in the framework of a collaborative project initiated by Philippe Lashermes of the UMR RPB-Equipe DIVA ( IRD Montpellier-France).